I usually choose to take photos outside. Whenever I go to familiar streets or famous spots, I always bring Nendoroids and cameras with me. At first, I would intentionally avoid the crowds…

When and why did you start collecting Nendoroids and taking photos of them? Can you tell us what your beginnings looked like? Do you also collect scale figures or dolls?

I was attracted to the Nendoroids during my college time. Before starting to collect Nendoroids, I had already had 5-6 scale figures, then I found myself really fond of the cuteness that comes from the unique design of the Nendoroid series. They have a comforting quality and were affordable for me at that time, so my interest in the Nendoroid began to grow since then.

I was motivated to take photos of Nendoroids by the Nendoroid photography works I saw online, which were captured by a collector. He is a great photographer and I feel great reverence for him. In his work, Nendoroids are so vivid that it seems like they actually live in that world. His works show a kind of vitality that is different from human portrait and animal photography. Because of his inspiration, I am eager to bring Nendoroids to life in my photos, so I began to learn photography and cameras.

Nowadays I am still collecting other figures and dolls, but only a small number. Most of them are used to complement the Nendoroids in my works, I am seldom collecting them for pure fondness now.

How do you plan the scenes and what kind of results do you try to achieve?

I usually choose to take photos outside. Whenever I go to familiar streets or famous spots, I always bring Nendoroids and cameras with me. At first, I would intentionally avoid the crowds to shape a world where only the Nendoroids exist, but now, if someone steps into the frame, I try to make people become a part of my work and create a unique feeling in the work. 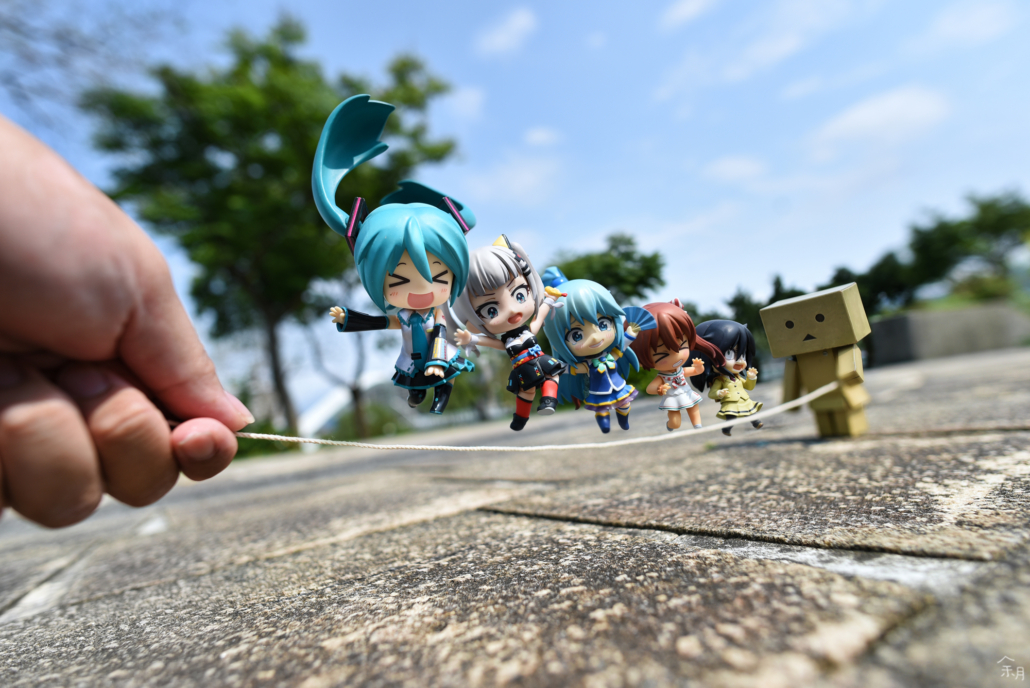 How is collecting Nendoroids and taking photos of them perceived as a hobby in Taiwan?

In Taiwan, the Nendoroids series are easily available, as there are many shopping areas that are specially designed for models, figures, and toys. Online stores are also well-developed in Taiwan, so we can check whether a product is at a reasonable price. There are official campaigns held by the authorized resellers of the Nendoroids series as well, so we can directly buy the new products through official channels (of course sometimes a long queue to wait).

It is not difficult to take photographs of Nendoroids or dolls in Taiwan, for this kind of unique photography is well accepted and comprehensible. These years I have seen many other photographers shooting their own collections outdoors, and sometimes passers-by would like to take some photos of these cute dolls as well.

Do you use any special photography or post-production technique?

I would like to try any skills or techniques myself if they could help me improve the quality of my work. I once heard a chef say to his apprentice, “No matter how good your cooking skills are, what matters most is what you present to your customers.” I think photography is the same. No matter what cameras I use, no matter how difficult those post-production techniques are; what matters most is the final work I present to my readers. So I have tried various appliances and post-production techniques to improve my work.

What is the favourite Nendoroid photo you have ever taken and which was the most challenging one?

I have a lot of unforgettable shooting experiences, and this “Battle Royale” is the most challenging one. I had spent a lot of time arranging all the Nendoroids, and then suddenly there were a lot of tourists coming to the spot. At that moment, I thought it was doomed, that I would have to include those passers-by in my work at that time. Then a lady riding a bike stopped in front of me and occupied most of the view of my composition, so I asked her to kindly move her bike away and explained to her that I was taking photos. She did not notice that there were a lot of Nendoroids on the ground until I told her, and she did move the bike and even called to the crowd at a distance, “There is someone taking photos here, please move away!” Thanks to the lady, all the people in the park made a space for me, and I finally captured this photo successfully.

What is your favourite season for taking photos?

I love to take photos in autumn and spring, on sunny days with a few clouds. Blue sky with clouds would make pictures more rich and interesting. Summer is too hot in Taiwan, so it is not my preference.

What cameras and lenses do you use to photograph Nendoroids? 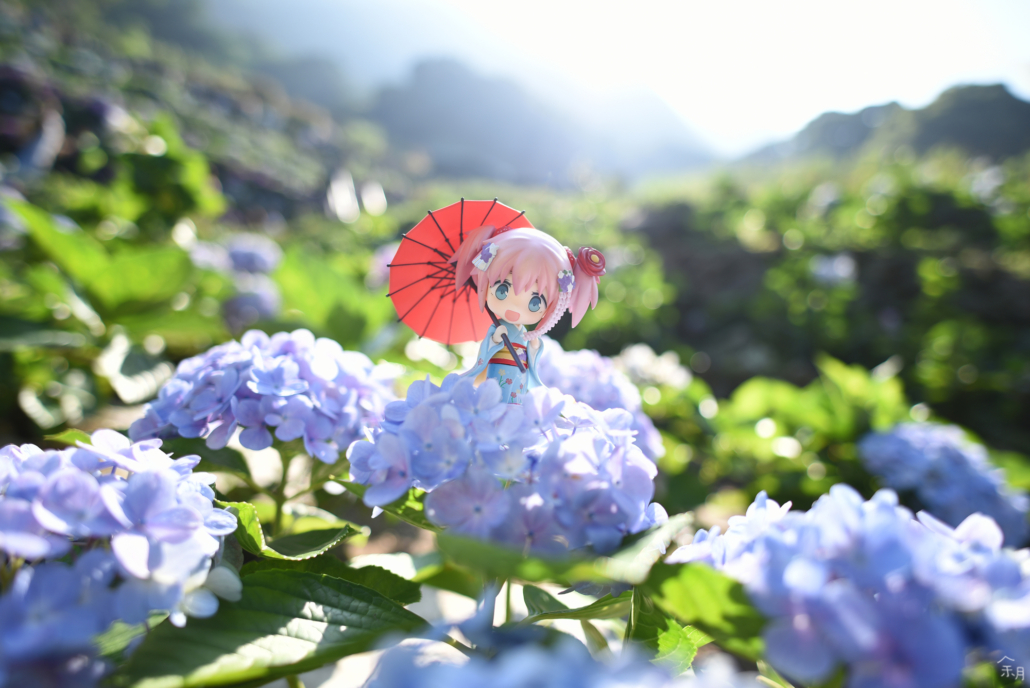 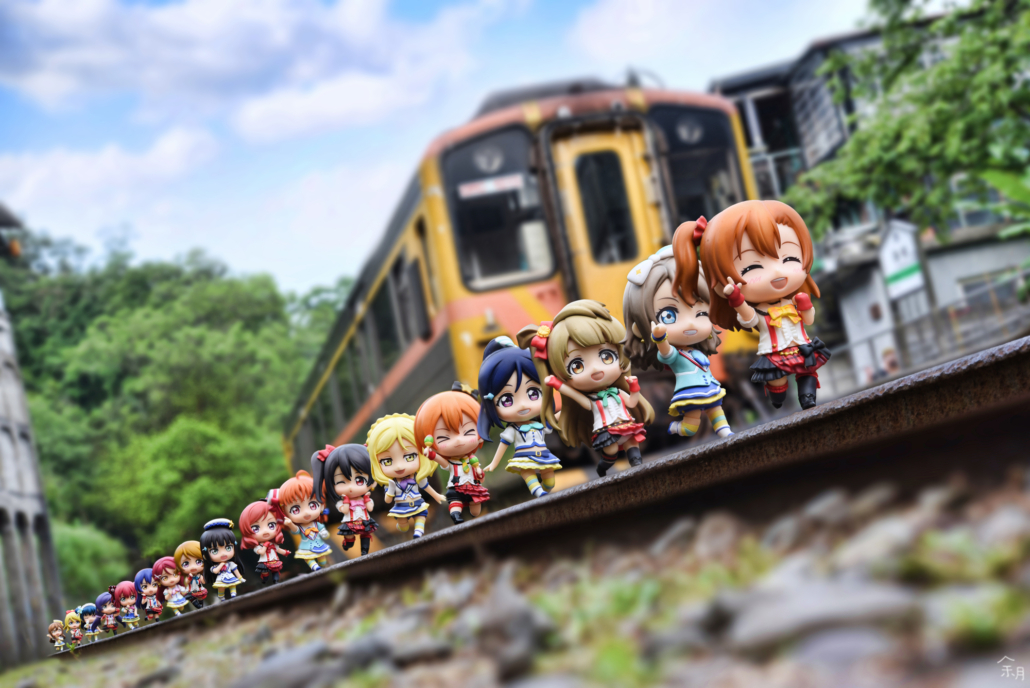 When collecting the characters you love and starting to take photos of them, many people would begin to think about how to make Nendoroids stand steadily. Because of the weight of the head, most Nendoroids need brackets to stand well. However, without some photography skills or post-production techniques, these brackets would be quite obvious in the pictures. Some Nendoroids do not need brackets to help them stand, such as Miku with her giant twintail, and may become the preferred subject, but this kind of solution is only to bypass the challenge brought by brackets. After all, the joy of photography comes from taking photos of the characters you love.

In Taiwan, I usually recommend collectors bringing their Nendoroids to the photography equipment stores to experience how to take photos and use cameras by themselves. Actually, I am not very familiar with cameras so my first recommendation is to choose image sensors based on your budget.

What do you consider the most important Nendoroid photography achievement you have ever accomplished?

I have been taking photos of the Nendoroids for more than 10 years. It has been a long journey with a lot of valuable experiences. I have been invited to attend several photography exhibitions both domestic and abroad, published dozens of photography collection books, and developed some related merchandise. From magazine interviews to lectures at college, I have gained a lot from scratch and also lost a lot. It is a journey with both joy and tears. However, all my works have been my greatest achievement throughout these 10 years. Even if there is no great exhibition space to show nor any judge to define their value, they are still my pride and my precious memory. The attached picture is the beginning of my journey, which was captured in 2012 when I just got started.

Is there any upcoming project you are going to surprise us with?

There are many projects in progress now. I hope I can give everyone a surprise and also be surprised by my own work.

What other hobbies do you have besides Nendoroid photography?

For now, I am an online game engineer. In addition to photography, I also make clothes for Nendoroids and I ran a Nendoroids apparel store in the past.

What is your favourite anime and anime character?

My favorite anime is Paranoia Agent.
My favorite character is Yura from Alive: The Final Evolution.
The favorite Nendoroid is No.673 Magic Hatsune Miku 2016.