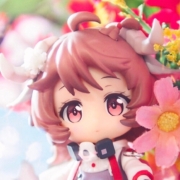 I have a goal of “bringing a Nendoroid to life in my style” in each photograph. I want to make my Nendoroid look as alive, bright, and cute as possible for people who do not collect them.

When and why did you start collecting Nendoroids and taking photos of them? Can you tell us what your beginnings looked like? Do you also collect scale figures or dolls?

I started collecting Nendoroids in 2009. My first Nendoroids were Miku #33 and Haruhi #09, and what is funny is that both of my first Nendoroids were bootleg because, at that time, I could not tell if they were fake or bootleg. At first, when I bought them, I did not know what this type of figure was called, but I knew they were cute, and the characters were known to me. After that, I started to buy more and more of them because I could combine the parts of different figures. It was so much fun trying to put a Nendoroid’s hair or face on another one. Suddenly, I realised that my house was full of piles of Nendoroid boxes. When I think about it, I was amazed that my little wallet had actually bought them all!

I started taking pictures in 2016 when I was about to enter college, and I had a lot of free time. I bought my first Nendoroid to collect it and keep it in a box, so, of course, I did not take it out to play with it. I do not know when I felt I was starting to run out of passion for buying them so there was no point in collecting any further. I thought I wanted to spend my money on something else that I would use, that it would be better. Until one day, I got to know the website “myfigurecollection.net’ or ‘MFC’” that gathers photos of toy collections. Everyone took their Nendoroid figures and dolls out to take pictures of them both outdoors and indoors. I thought it was absolutely fantastic! Every picture looked lively and bright, as if they were models and no longer lifeless toys. It ignited a passion for taking photos of Nendoroids in me. I want to make my toys, which I have kept in boxes, come alive like that. Among toy photographers, I admire Koko-san and Vince-san, who have been my inspiration since the beginning. I respect them for bringing me up to this point.

Occasionally I buy other types of figures or dolls, but I am focused mainly on buying Nendoroids even though sometimes I can barely afford to pay for them.

How do you plan the scenes, and what kind of results do you try to achieve?

I have a goal of “bringing a Nendoroid to life in my style” in each photograph. I want to make my Nendoroid look as alive, bright, and cute as possible for people who do not collect them. When people see this, they will want to buy it. Even though I might be a little overact. I was inspired by scenes in anime or fan art from Twitter or Pixiv to develop ideas for each picture. Or sometimes, I think that this particular Nendoroid is suitable for shooting a specific scene, so I set up the environment to suit the Nendoroid.

How is collecting Nendoroids and taking photos of them perceived as a hobby in Thailand?

In Thailand, collecting Nendoroids is rather popular among people who like watching anime, playing games, or watching movies. I have often seen the Thai community take pictures of their collections for specific Nendoroids on a regular basis. Collecting Nendoroids is fairly common in Thailand; therefore you can find brick-and-mortar shops and places where you can buy them. There may be many people who know Nendoroids but do not know what they are called. For example, my family or friends simply call them ‘some toys, some dolls’ or ‘cartoon sculptures.’ As a Nendoroid photographer, I am unsure how people look at me because I live in a group where everyone typically takes pictures of dolls, toys, or figures. But I do not think everyone in my country looks at this hobby as strange because it is like taking pictures of people, buildings, animals, or landscapes, only our models are more petite than usual.

Do you use any unique photography or post-production technique?

Personally, I admit that I am not exceptionally skilled at photographing or editing since I am studying law and I am rather busy with my studies. My techniques are based on trial and error. And, perhaps surprisingly, all my photos are edited on my mobile phone by the apps below. It is a free app, and it is really user-friendly. I can recommend the apps to people like me who do not have time and do not specialise in editing. You keep trying until you find your personal style. In terms of my style, I am not too clearly defined. After taking a photo, I edit it and create the atmosphere I want it to be. Sometimes, I also want to try demanding shooting poses to challenge myself. But this happens only once in a while because it is very tiring to clean up the background after the shooting session.

What is the favourite Nendoroid photo you have ever taken, and which was the most challenging one?

It is a challenging question for me. I have to say that I like every picture I take, and on top of it, every shot is a challenge for me because sometimes, when I take pictures, I like them as they are without editing them afterwards. But let me get back to your question. Among the images I have taken, the one I like the most is Yotsuba from Yotsuba&! series because the result matched best with my idea, whether it is the light, the atmosphere, or the vintage feel it gives.

And the most challenging part: this is my Christmas photo from 2018 if you can see it. Before and after, you will not be surprised why I chose this one as the most challenging but most beautiful picture for me. At that time, I remembered that it took 3 hours to shoot it and over 2 hours of editing, but the final result was quite impressive. And that year it was one of my favourite pictures. This picture is, overall, tricky. I do not know how to explain it. At that time, I was still using a small phone camera and did not know how to work with light and shadows. The scene was difficult to arrange, and the Nendoroid was relatively small compared to the trees. So I continued to use the corners and magic in the app until it came out to the far right. In the end, when I posted this photo, I told myself I was not that good at photography after all, but I am better at editing photos. However, now that I have developed my skill, some images do not need editing at all.

What is your favourite season for taking photos?

My country only has summer, which is usually hot or even boiling. If you ask me, I can take a picture of any kind. I go out in the rain to get a realistic picture. But if I have to choose, I like to take pictures in winter because when taking photos outside, it is not hot therefore you can take photos outside for a long time. I love going out and taking pictures because I think the natural light makes the photos look bright and not overly refined. But with the hot weather, I am sometimes lazy and do not feel like taking a shot at all, so I tend to choose the evening to photograph. My country does not have snow in winter, and it is very short – no wonder there is not any snow in most of my photos.

What cameras and lenses do you use to photograph Nendoroids?

I do not know much about cameras and use only one camera. It is an Olympus OM-D E-M1X, which I got from my father, and my lens is a Panasonic Leica 25mm f/1.4.

In my opinion, first, you must really love a Nendoroid, no matter how many Nendoroids you have. Once you love them, you will want to share their cuteness with others. When you start taking pictures, you do not have to be afraid of them not being beautiful; you do not need a scene; you do not have to be good at photography. With a simple phone camera and a lovely Nendoroid, you can make it pose in different places and take beautiful photos; that is enough. And as you keep doing it, you will practise and refine your skills and, finally, find the style you like. That is how my start looked. It is elementary. As for the equipment, I do not have many recommendations. To start photo shooting, you need a camera – no matter what kind of camera, any brand will do. If you want me to recommend another piece of equipment, a tripod might be helpful when setting up the camera to make capturing the pose of your Nendoroid easier.

No matter what equipment you choose, you should be careful how you spend your money because Nendoroids and cameras are expensive. If you want to test the trial and error method, you can start using your phone camera first. I am sure you might be as good as with an expensive camera.

What do you consider the most important Nendoroid photography achievement ever?

The thing I am most proud of is when Vince, who is my idol, commented on my photo on IG. There is nothing more joyful than when our idols admire our pictures. Another thing I am proud of is when people share my photographs; I think they appreciate my photos as much as Vince’s. It was a great honour for me. But one share I have remembered today is the one by Chen Zeco, Johnston’s illustrator. He shared a picture of Johnston in my wedding dress on his Facebook profile. It is something that I will never forget.

Is there any upcoming project you are going to surprise us with?

I have new content on my Facebook page where I write about different topics connected to Nendoroids. I would like everyone to follow because I believe it is interesting and useful to people who like Nendoroids. I thought that after I had some free time, I would continue. However, there may be some modifications to the presentation style, including possibly adding content in the figure, doll, or Re-Ment toys. But I am gonna keep it as a surprise for now, when it is gonna be.

What other hobbies do you have besides Nendoroid photography?

I also spend quite a lot of time studying and reading law books. So I do not have many other hobbies. But to be honest, I like playing games very much, although I do not think playing games is really a hobby to me. It is just a type of stress relief while I am learning.

What is your favourite anime and anime character?

I like anime quite a lot. But if I have to choose what I love, it will be KonoSuba and No Game No life. As for my favourite characters, I like to separate them into two categories, males and females.

The male character that I have loved for a long time, although the anime is not widely known, Yukimura Tooru from Aoharu x Kikanjuu.

The female character that I like the most is Nakano Miku from 5Toubun no Hanayome.