I think every photo has a story behind them, no matter whether it is from a single shot or a series of shots like a comic strip…

When and why did you start collecting and taking photos of figures? Can you tell us what your beginnings looked like?

I remembered it was around late 2014 when I first saw a figure in a diorama from DeviantArt and I was amazed by it. I was still focused on collecting Gundams at that time so most “figures” I took photos of were customized Gunpla models. Everything changed when I got my first Nendoroids in 2015, that’s when I started taking them outdoors for photo shooting.

Eventually, I started following people in this hobby and learned as much as I could from them until I started to develop my own style of photography (and I am still learning up till this day) from indoor diorama shoots to outdoor shoots or combinations of both. I also remember when I was taking summer art courses at school in the same year, my instructor brought up Toy Story to the topic, and that’s when it hit me about the idea of “bringing something to life”. I said that to my instructor after the class, and she encouraged me to go for it.

What kind of photos do you take? Is there a story behind them?

I mostly focus on figures of anime and game characters, though I occasionally shift to characters from Western franchises like Disney, Marvel, etc. to explore a variety of audiences, especially that I live here in Canada. It is a bit tough trying to gain an audience from a local standpoint, so I try to step out of my comfort zone sometimes.

As for the stories, I think every photo has a story behind them, no matter whether it is from a single shot or a series of shots like a comic strip. The whole concept is to bring what is in my imagination to something real and alive about that character and to be able to tell the story visually. Although I think taking photos of anime statues is sometimes more challenging when it comes to storytelling as they stick to a single pose, and the challenge there is to create the scene to complement that figure’s pose.

Also, aside from the dioramas I make based on the figure’s background, some of the sets I design are usually places I want to go to (but will never be able to) such as fancy resorts, places in Japan, or mystical worlds in my imagination that I wanted to be real. So you could say, some of these dioramas are like miniature projections of my “inner yearnings” of places that I will never be able to go to or experience in reality.

How difficult is it to build dioramas for your projects? What was the most challenging diorama you have ever made?

It depends on the kind of details, space and scene for the diorama. Usually, the dioramas that need a large space and more detail are more challenging since I have to consider some things before building, such as props, positioning of the elements in the scene, light source, space required, etc. and how will these elements blend well in the scenario and composition once you start photographing the figure in the diorama. Not to mention the materials to be used in making the props and the quantity needed for that set.

When I was just getting started, it usually took me a week or more to complete a particular diorama since I was starting from scratch. But now that I have made and acquired several set pieces in the past 5 years, it could only take me a few days to a week to complete a diorama. I just recycle and customize those pieces if I wanted to make something new, just to save storage space.

When it comes to the most challenging diorama I made, I could think of two: One was the indoor Shinjuku diorama for Kotobukiya’s Jeanne Alter photo session. I built the buildings in this set over time (maybe more than a month) as the building pieces were pretty large and had to design it to be stackable for storage. Other details in the set would be where to put the lights, and also the customized motorbike from a Barbie playset. I also had to paint the night sky for the backdrop on a 40” board.

The other set was the photo shoot for Tohsaka Rin’s Formalcraft version. It is the staircase and railings, plus the entire size of the set that made it a challenge because of the repeating pattern of building for the stairs and rails. I think this was also the largest “indoor” diorama I have made, since it consists of a two-storey hall with stained glass windows. The structure of the set was a bit tricky to build as well.

There were other sets that I built that became challenging to build as well, (battleship, submarine deck, large waterfall) but the two above were the most challenging for me. 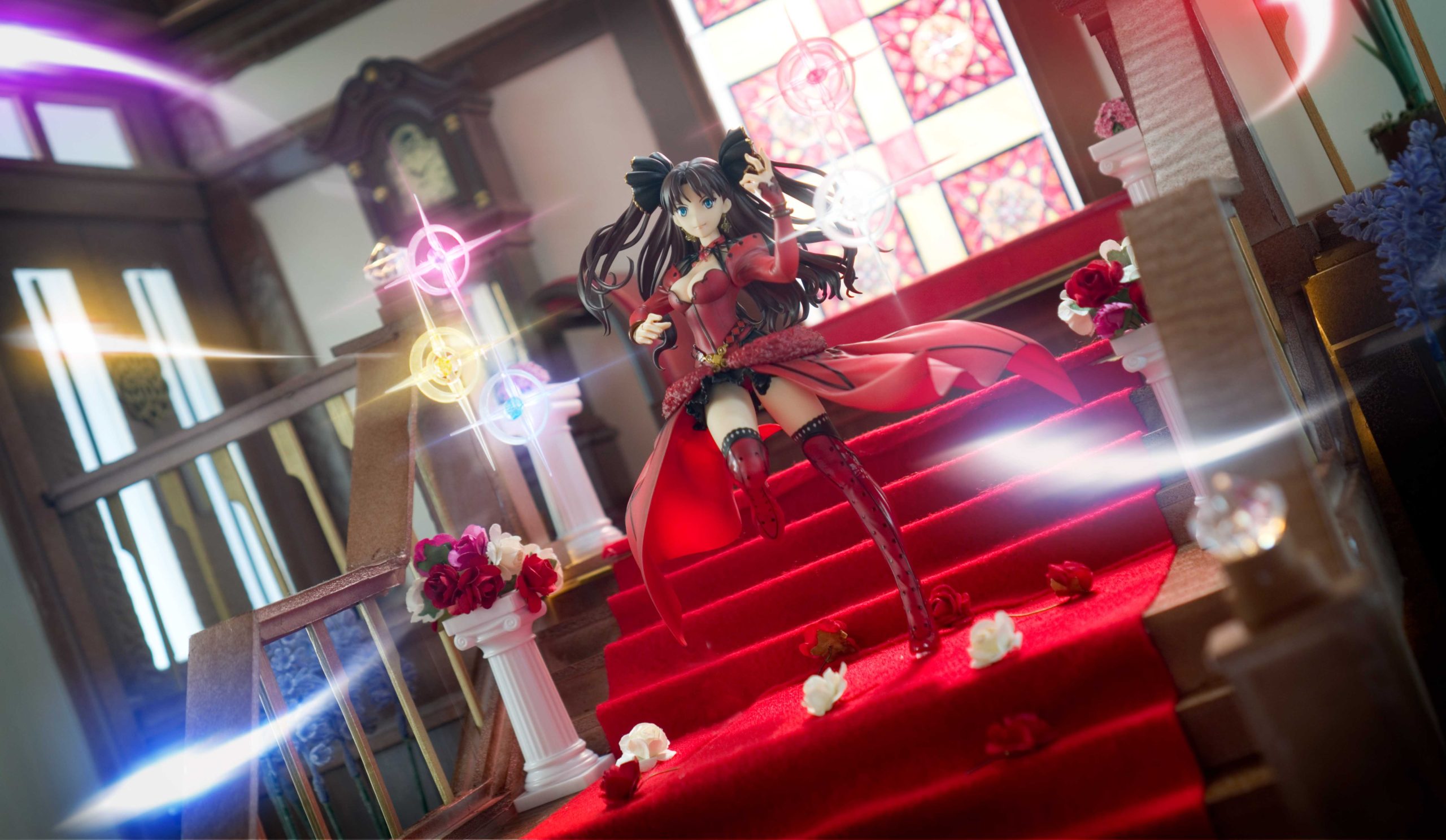 Do you use any special photography or post-production technique?

In most cases, removing support stands from Nendoroids or Figmas. It would usually involve taking two shots of the same scene with and without the figure, along with the support, then fix them in Photoshop. Although there are times I can make them stand without the support by balancing or leaning the figures against an object next to them without making it too obvious. But those are something like a test of patience since they tend to fall easily if not placed carefully.

Other scenarios involve special effects with a mix of both practical and photoshop effects for some scenes, such as waves, rain, or adding water below the lighting if I am trying to create an underwater atmosphere, like one from my recent photo session. And for outdoors, I try to use forced perspective, where I try to match the background’s perspective into my set by elevating the diorama above the ground and to photograph from a certain angle to blend it well with the background.

Is there any upcoming figure project you are going to surprise us with?

For now, I do not have any “big projects” to work on until the figures I ordered arrive. And with the current pandemic, I expect some long delays so there will not be any in the meantime. However, I am working on what I call “Remake Series” for this year, where I am recreating some of the old figure photos I took back when I was still new to the hobby, and I am doing a remake photo session for the same figure where I am applying the new things I have learned in the hobby over the past 5 years. So far, I have done five remake photo shoots (Hokusai, Saber Alter, Tamamo Lancer, FN FAL, Takao), and I still have a couple more to go before this year ends.

What is the favorite figure photo you have ever taken?

That is a great question! And a tough one as well… I would say it is the photograph with Kotobukiya’s Jabami Yumeko from Kakegurui. It was a collaboration project I worked on with them a few years ago when the figure was released, and I think it was that photo session where I felt it perfectly captured Yumeko’s personality based on the show, and the set and props I designed for her took quite a lot of planning and test runs before I went for the final photo shoot.

What cameras and lenses do you use to photograph the figures?

I used to work with a Nikon D3100 with its default lens (18-5 mm) when I was just getting started with the hobby, and used for two years until I got my current camera, which is a Sony A6300 with an OSS 1.8/35 mm lens. I will probably keep working with this one but I am hoping to get a 50 mm lens sometime in the future.

It may depend on a person’s budget. Personally, I think any camera should be fine for a start, even with the basic ones like what I did. And depending on their preferences, they can start upgrading their equipment from there. I do not have a 50 mm lens yet, but it seems quite popular among other figure photographers I know. Other kinds of equipment, such as off-camera flashes, are a great help for me, besides my regular lights (or desk lamps). And of course, a tripod is a must-have.

What is the most important figure photography achievement you have ever accomplished?

They would send me samples of their figures for me to do photo shoots, and the latest one I did was in April for Bishoujo Figure of Dark Phoenix from Marvel series (before the lockdowns came). It is one of those goals I would put on my bucket list, and I really enjoy collaborating with them.

On the competitive side, one big achievement was when I won Top Prize from Good Smile Company’s Nendoroid Christmas Photo Contest in 2017, where I had Nendoroids You Watanabe and Hanamaru Kunikida from Love Live! Sunshine!! in a Christmas Celebration shoot. 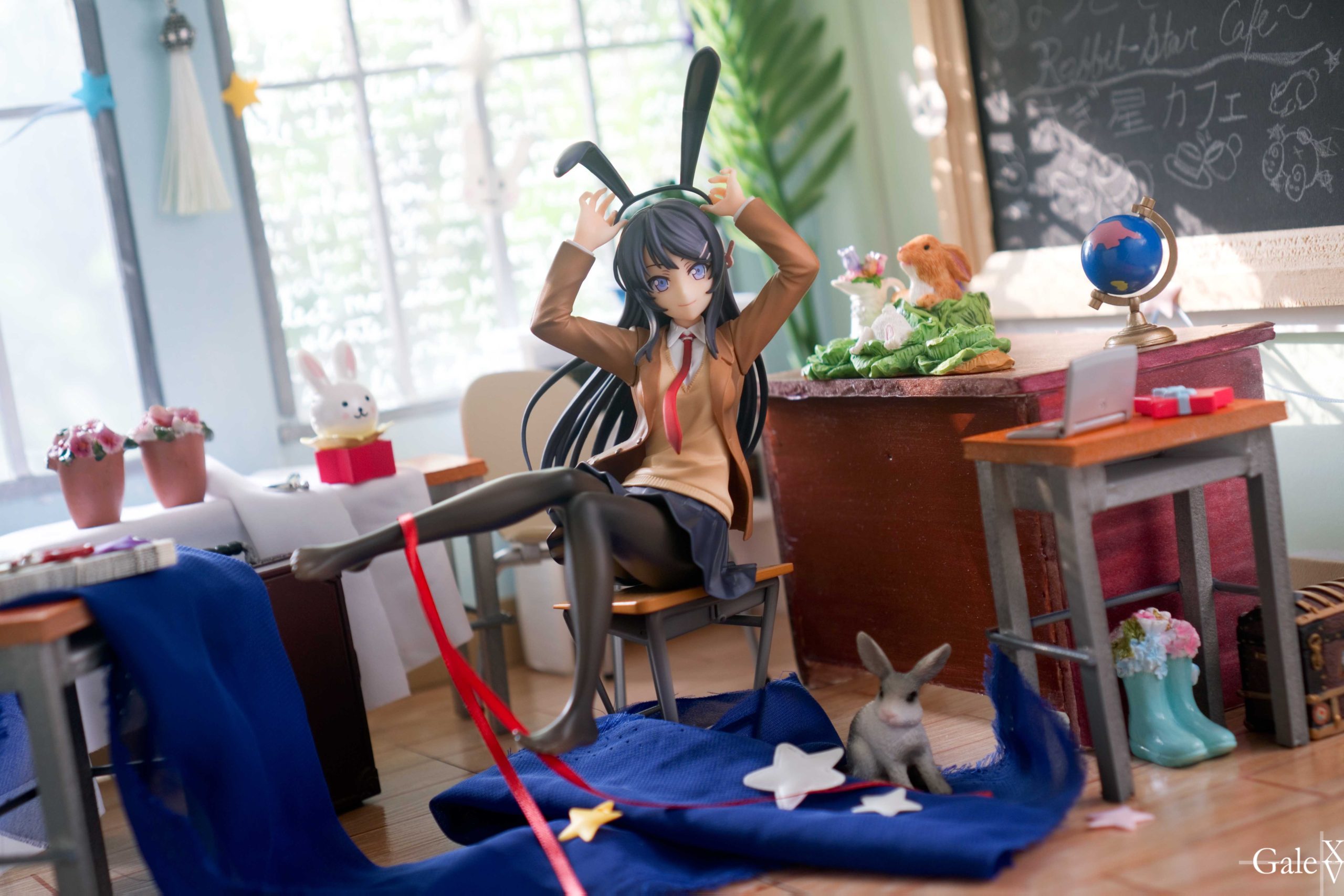 What about the time when you are not taking photos, how do you enjoy spending your free time?

When I am not planning for any shoots or am just taking breaks from projects, I like going outdoors alone most of the time, and just enjoying nature. I live near a beach so taking a walk or biking by a lakeshore and just enjoying the breeze from the lake are the usual routines I do during weekend mornings. And recently I have just learned how to do stand-up paddle surfing, so that is another outdoor activity I have got on the list.

Who is your favorite anime and anime character?

Well, there are a lot of them, but if I were to choose, currently it would be Mash Kyrielight from Fate/Grand Order.